What Would Happen if there was an Olympics and Nobody Came? 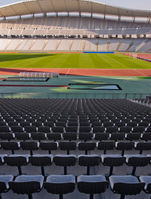 On Aug. 10, President Bush attended a registered church just before the opening of the Olympic Games. The Washington Times reported that Bush was denied permission to visit an unregistered church service or meet with officials of the unregistered church movement. His controlled visit was arranged by China’s President Hu. Of course, Bush could have held a news conference accompanied by unlicensed, unfettered, and uncontrolled preachers but he did not do so. Might be considered a little too militant.

The president told an NBC reporter that attending the service gave him opportunity to say to the government, “Why don’t you register the underground churches and give them a chance to flourish?” Evidently, someone fouled up on Bush’s pre-trip briefing. The unregistered churches do not want nor would they accept government registration! The underground church officials rightly understand that no government has the authority to control a church. Moreover, the unregistered churches are flourishing very well, thank you albeit suffering for their stand. The U.S. should have stood with them and boycotted the games!

Samuel Lamb is a 70-year-old leader of an unregistered church in Canton who keeps a black case by his bed. It is packed with clothes and a toothbrush. He said, “If they want me to register, I just pick up the case and say, ‘take me to jail, I’m ready….I will never register.’”  In fact, these courageous leaders consider jail as their seminary training!

The president could have embraced the courageous, committed, Christian leaders making their plight, persecution, and prosecution center stage but he did not do so. Bush, in my opinion, should not have attended the games if he could not embrace persecuted Christians. He sure embraced everyone else, even Communist leaders! He hugged his old buddy Putin as Russian tanks were rumbling into Georgia! He even treated China’s President Hu as if he were a gentleman instead of a totalitarian thug.

In 1980, President Jimmy Carter called for a boycott of the Moscow games because months earlier Russian tanks rolled into Afghanistan. (And they rolled out in disgrace in 1989!) The U. S. Olympic Committee, the U.S. Congress and some of our allies, supported Carter.

The Chinese leaders are atheists who hate the churches but realize that it is impossible to wipe out all Christians, so they are trying to control them through registration. The Religious Affairs Bureau controls all religion and insists that all churches register with the Three Self Patriotic Movement (TSPM). Three Self refers to self supporting, self perpetuating, and self governing. “Self-governing!” That’s a joke but Christians are not laughing; only languishing in prison. Over 700 church leaders were arrested last year and only days before the Olympic Games, the leader of the House Church Alliance and his wife were arrested along with another preacher.

To qualify as a “registered” church they must have a committee of five to run the church and the Religious Affairs Bureau must approve the committee. Moreover, the pastor must have the approval of the TSPM. Of course, no Christ-honoring, Bible-preaching church would permit such restrictions since no one outside the church membership can have any control over a local church.

All thinking Christians would conclude that those restrictions are outrageous; however, many Chinese Christians in the government-approved churches defend them as progress! They are quick to point out that official churches did not exist 25 years ago, and since 1990, they have increased from 6,000 to more than 13,000 churches under state control. Their membership during that time has increased from 5 million to almost 15 million. So what’s the big deal about some state control? It seems that American and Chinese pastors ask the same question!

One pastor told of Religious Affairs Bureau officials who came to his legally registered church and sat in the front where they drank beer, smoked and talked while TSPM pastors treated them royally and almost kissed their rings. As a result, numerous laymen left the church to join with illegal “house church” Christians.

Not only do unregistered church pastors get pressure from the Communist officials and TSPM pastors but evangelicals in the Free World are pressuring them to not be so “hard headed” and join the registered churches. It is said that the TSPM is not as bad as it used to be and Chinese Christians, especially the older ones, have been influenced too much by American hard-liners–Fundamentalists! Gasp! It seems Fundamentalists are the cause of child abuse, female abuse, gun proliferation, and maybe leprosy, sunspots, dandruff,  and arthritis!

However, the issue is not how bad the movement is or how corrupt the officials are. The question always comes back to, who is head of the church? Is it possible to serve two masters? Can church leaders permit any government entity to control them and still be true to the Word of God?

George Chen is almost 70 years old. After the 1949 Communist revolution, Chen’s work grew increasingly dangerous. He was jailed for religious activities in the 1950s, and in 1960, he was sentenced to hard labor at a prison in eastern China. His wife and son were still in Shanghai, and he saw little hope for survival. “They tried to make things really bad for me by putting me to work in the cesspool,” Timothy Morgan, in a Christianity Today article quotes Chen as saying. “I spent my days deep in human waste, turning it with a shovel to make compost. They thought I’d be miserable, but actually I was happy. It smelled so bad that no one would come near me, so I could pray and sing aloud all day.” In 1978 Chen was finally released, and discovered that the churches he planted had grown from the original 300 members to 5,000! He spent about 20 years in prison because he would not be controlled by the state!

Bush fumbled a great opportunity to take a principled stand for freedom as President Carter did. Bush could have identified with Christians of character. The Bird Nest stadium in Beijing should be empty tonight but alas the games go on—while Christians are imprisoned, church services disrupted, church buildings are razed, and families are separated. Bush does not understand the issue of unregistered churches and doesn’t need to, but he knows dedicated, sincere, honest people are being persecuted and he did not take the opportunity to stand with them against an oppressive, totalitarian government.

If President Bush and American athletes had taken a principled position and boycotted the games it would have shouted “freedom” and been heard around the world. I have been wondering this week, what would happen if they had the Olympic Games and no one came?

(Dr. Don Boys is a former member of the Indiana House of Representatives, author of 13 books, frequent guest on television and radio talk shows, and wrote columns for USA Today for 8 years. His most recent book is ISLAM: America’s Trojan Horse!  These columns go to over 11,000 newspapers, television, and radio stations. His websites are www.cstnews.com  and www.Muslimfact.com.)