“Ms. Kagan, Are You Now or Have You Ever Been a Lesbian?”

The above pertinent, personal, and principled question will not be asked of the new Supreme Court nominee because no senator has the courage, commitment, and character to ask it, although only a fool or fanatic says the question is illegitimate. 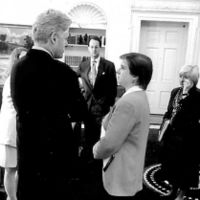 Elena Kagan, at this time Deputy Assistant to the President for Domestic Policy, speaks with Clinton in the Oval Office on September, 1997.

The above pertinent, personal, and principled question will not be asked of the new Supreme Court nominee because no senator has the courage, commitment, and character to ask it, although only a fool or fanatic says the question is illegitimate. Even “conservative” Republicans are silent on this matter. Maybe some of them need a spinal transplant to help them take a stand. I don’t expect Democrats to take a stand since they haven’t stood for anything worthwhile since Senator “Scoop” Henry Jackson died Sept. 1, 1983 and Congressman Larry McDonald was killed the same day when Korean Air Flight 077 was shot down by Russian interceptors presumably killing all on board.

Reports have been circulating that Kagan’s chosen homosexual lifestyle is well known in the Harvard community and her partner is commonly known. She has not been trying to hide her sexual identify—until now.

The White House refuses to deny her sexual aberration, but her appointment is a further indication that Obama is trying to live up to his promises made to homosexuals during his campaign. He will garner some points with them even if she is rejected; however, if he does not push her approval to their satisfaction, he will plummet further in the polls.

Permissive pundits, politicians, and preachers will tell us that her lifestyle is not relevant to serving on the Court, but even some homosexuals disagree. If she is a lesbian, we Americans have a right to know because it will affect all of us for a hundred years.

Everyone knows that she is without any experience on the bench, and we know from her papers some of the positions she has taken. According to the known facts, she has spent a great deal of time way out in far left field.

Even some conservatives applaud her “honesty” but if she is so honest then let her reveal her beliefs on homosexuality. Frankly, I don’t want an honest homosexual justice even if she were a Tea Party conservative. Neither would I want her if she were an evangelical Christian (instead of being a Jew) if her lifestyle conflicts with evangelical beliefs.

She should be rejected whether or not she is a lesbian because of her radicalism. As Dean of Harvard Law School, she tried to prohibit the military from recruiting Harvard students because of the military’s “don’t ask, don’t tell” policy. Moreover, her comments and writings indicate that she has a political agenda strangely similar to Obama’s. Furthermore, her praise of a radical Israeli judge will no doubt be a part of the mix during the dog and pony show known as a senate hearing for a Supreme Court nominee.

If she is a lesbian, that is enough to vote against her. Any senator who votes to approve her should be kicked out of office by those who were stupid enough to vote him into office. That is not “hate” or “bigotry,” but my sincerely held religious views that I have had for a lifetime. Moreover, that view is supported by thousands of years of teaching of all major religions. It seems the only sin one can commit in our time is the sin of intolerance and I ask my critics to show some tolerance to millions of Bible believing Christians who believe that when two (or three!) people of the same sex climb in bed together, it is still an “abomination.” That is true for the powerful, the poor, the prosperous, the prince, the priest, or the pope.

If Obama had nominated a fundamentalist Christian to the Court (why are you laughing?), would there be any hesitancy to ask very pointed, even outrageous questions. “Do you believe that rebellious sons should be stoned?” “Do you believe the earth is flat?” “Do you educate your children at home?” “Do you believe in an ancient earth or young earth?” No one doubts the reaction of the senators if a Bible-believing and Bible-practicing Christian was the issue.

As an aside, would someone like to inform me why no one has ever discussed the possibility of an active, Bible believing Christian serving on the Court? After all, we are one of the largest demographic groups in America. In addition, should I remind you that we were the original founders of this nation? We have five Catholics, two Jews, a Black, so why not one of us? Anyone want to hazard a guess? Could it be bigotry? (Gasp!)

A lesbian on the Supreme Court? Incredible! America skipped into Sodom many years ago and it looks as if we may gallop into Gomorrah this week.