I admit to bias: Liberals should be suspect even when quoting the multiplication tables, so that is why I am suspicious of most of the presidential candidates of both parties and especially suspicious of Senator Barack Obama. 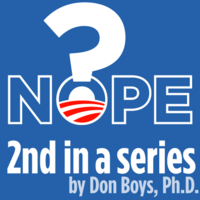 I admit to bias: Liberals should be suspect even when quoting the multiplication tables, so that is why I am suspicious of most of the presidential candidates of both parties and especially suspicious of Senator Barack Obama. Voters should demand some answers from him but I’m afraid they won’t get the answers because reporters are too uninformed or too cowardly to ask!

Barack Hussein Obama was born in Hawaii to Stanley (yes that is correct) Ann Dunham from Kansas who moved to Hawaii and there married Muslim, Barack Obama, Sr., a black student from Kenya. He had left his pregnant wife back in Kenya to care for their son and soon-to-be-born baby. He was also a bigamist. Obama’s dad, true to form, left his wife and two-year-old Obama to work on a Ph.D. at Harvard. He returned to Kenya to take a lucrative government job and another wife.  He ended up fathering eight children by four different women, not all could be counted as wives.

Obama’s white mother then married  Lolo Soetoro, an Indonesian Muslim student at the University of Hawaii who moved the family to Indonesia when Obama was six.  After his drinking and womanizing stepfather died, the family moved back to Hawaii when Obama was in the fifth grade. During those years, Obama lived in nice neighborhoods and attended the best schools until he was graduated from high school.

Barack Obama was a member of Trinity United Church of Christ that has ten black staff members! All seven writers for the church’s Trumpet Newsmagazine are black. The pastor is Dr. Jeremiah A. Wright, Jr. who baptized Obama into the church 20 years ago. The United Church of Christ was formed by the 1957 merger of the Congregational Christian Churches and the Evangelical and Reformed Church; it is probably the most liberal mainline denomination in the U.S.

Trinity is the largest church in the UCC and on the church’s web site, the pastor says, “We are a congregation which is Unashamedly Black ….We are an African people, and remain ‘true to our native land,’ the mother continent, the cradle of civilization.” Sounds super racist to me!

Wonder what would happen if our church announced that we are unashamedly White? Of course, we are but we don’t feel a need to crow about it. Most informed Bible-believing Christians don’t care whether you are red, yellow, black, or white since “all are precious in His sight.”  How would the media react if Romney or Huckabee announced that their churches were “unashamedly white”? Why are reporters not asking Obama how he can be a member of such a racist church?

I got weary counting the times “Black” or “African” were used on Trinity’s site and I noticed that Christ seems to be a non-entity. I also searched the many pages for an indication that all men are lost and need a Savior but without success. I thought this was a “Church” web site. On the site, Pastor Wright  proves that he has swallowed the humanist propaganda that “Our history teaches us that all of civilization began in Africa.” Afraid not. How about Mesopotamia?  Remember, the Garden of Eden located just north of the Persian Gulf where the Euphrates and Tigris meet?  That’s not Africa!

Dr. Wright is an obvious bigot as his sermons prove. He preaches that Zionism is racism and has compared Israel with South Africa of 20 years ago. On the Sunday following the attack on America, Wright said the attacks were a consequence of American policies. He also said, “In the 21st century, white America got a wake-up call after 9/11/01,” as quoted in the Oct., 2003 issue of The Trumpet Newsmagazine, edited by Wright’s daughter.  Will some reporter ask Obama if he repudiates this paranoid political propaganda? Moreover, didn’t black Americans get a wake-up call as well? They are part of America, aren’t they?

Wright shows how little he knows about history and how bigoted he is when he said of Israel, “The Israelis have illegally occupied Palestinian territories for over 40 years now.” He got that straight out of Arafat’s playbook.

The church promotes “economic parity” which is a euphemism for communism. All right, let me soften it a bit so the far leftists can come off the ceilings. Maybe I should have characterized it as “socialism,” but then socialists are people who are about 7 months pregnant with communism. And given time….. Socialism is a farce and people who believe it are fools and those who promote it are frauds. I am not suggesting that all liberals are socialists or Communists; some are simply stupid and for that, alas, there is no remedy.

Keeping true to the church’s commitment to socialism, associate pastor, Rev. Reginald Williams, Jr. wrote in their bulletin lambasting government leaders for not making “fresh food stores” available in the black neighborhoods of Chicago. Williams, not an original thinker, complained about the many fast food places in the neighborhoods while “fresh food stores are lacking.” Williams goes on to declare, “This is an issue which we must all attack. We must push our policymakers for programs for health education, good stores for proper nutrition and access to health care.” When did “government leaders” become responsible to provide any kind of stores?

I want to know if Obama thinks it is government’s job to guarantee parity between fast food joints and fresh food markets. Such a position would make Marx, Lenin, and Stalin all stand up and cheer. Hey, Obama, what do you say? Will some fearless reporter ask him that question?