Drop Pig Poop on Mecca if America is Attacked!

“Mutual Assured Destruction”…It was the deterrence principle that a well-armed nation, determined to live safely, would ensure peace. 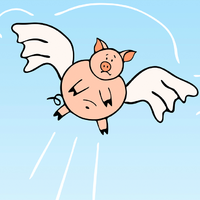 The President of the U.S.A. has one major job—to keep the nation safe. Many nations have developed nuclear weapons. During the cold war (1945 to 1991) with the Soviet Union, the citizens lived in a strained but fairly safe world with both countries’ huge inventories of nuclear bombs. We lived under the M.A.D. doctrine standing for Mutually Assured Destruction. The reasoning was simple if primitive: You bomb us and we will bomb you. You bomb us even more and we step up our next bombing of you—until the world is a wasteland. It worked. There were battles from time to time in Korea, Vietnam, etc., but neither side was stupid enough to use nuclear weapons.

It was the deterrence principle that a well-armed nation, determined to live safely, would ensure peace. The thinking was that no sane national leader would jeopardize their own security, even existence, by launching an attack on a power that could and would destroy them.

But that is now passé. Maniacal Muslim monsters don’t care if they live or die nor do they feel any concern for their people. In fact, the possibility of being blasted into eternity with a nuclear bomb is somewhat intriguing to them, enhanced at the thought of being welcomed by 72 green-eyed virgins.

If we are going to have any sense of security in a world dominated by fools, fanatics, and fascists then we must crawl into the minds of Muslim fanatics and try to “work their system.” I think I have succeeded in doing that and might be able to suggest a kind of M.A.D. program that would guarantee an unsteady but mutual peace. Issue a threat to the Muslim world that Mecca and Medina will be bombed with pig poop, pig’s entrails, bacon grease, etc., if they attack us again.That may not be most intellectual suggestion; however, it may be the most practical, profound, and productive proposal that has come from the Pentagon or any prissy politician.

President Obama should speak to the whole world before the United Nations and declare:

“We Americans want to live in peace; however, there are some who teach that they must some day rule the world whether through personal conversion or political control. We will not permit that to occur. We are rather satisfied with our nation as it is. Therefore, from this date, supported by my Joint Chiefs of Staff and the U.S. Congress, the U.S. has made the following decision.

“If and when any Muslim nation or Muslim group attacks the U.S.. (excepting obvious small, independent, maverick attacks) U.S. bombers will immediately fly, at my command, to Saudi Arabia and bomb the two holy cities of Mecca and Medina. However, our payload will be pig’s entrails, discarded hog meat, and tons of pig dung (provided enthusiastically by pig farmers in Iowa) that will saturate both cities from city limit to city limit. The land, buildings, and any people there will be totally contaminated.

“Muslims will not permit any non-Muslim to enter Mecca or Medina; however, after an attack upon America, Porky Pig, Miss Piggy, and their friends are coming to town. You can count on it. That is one promise I promise to keep.

“We don’t desire any deaths or injuries; however, researchers in U.S., Denmark, Netherlands, and Canada have discovered that the ‘nostrils of 49% of pigs and 45% of pig farmers,’ contain traces of the ‘superbug’ MRSA that is devastating people worldwide. ‘Piglets had the highest rates of infection and in fact, every single pig under the age of 12 weeks harboured MRSA colonies.’ Therefore, there will be potential injury to citizens who do not flee the cities although      MRSA infection is not as permanent and deadly as nuclear weapons.

“After thoroughly bombing both cities, one of our planes which piggybacked a block-buster bomb will put it down on top of the holy Ka’ba leaving, if I may quote Jesus Christ, not one stone left standing upon another. This is not desirable but it is better than bombing the two cities back to the stone age.

“We have no desire to kill or injure any person, however, this is a commitment the American people have made through their representatives and we will not back off. There will be no further delay, discussion, or debate. After an attack upon us and we have confirmed that the perpetrators are Muslims, the pig poop will fall.

“In kindness, we have made this decision hoping that no Muslim leader would want to stand before Allah and be held accountable for the total destruction of the Ka’ba and the contamination of the two holy cities of Islam.

“Our desire is to provide some assurance of a peaceful existence of American citizens— Muslims and non-Muslims. We expect all Muslim leaders to repeat this promise to every Muslim on earth.

“If I may quote one of America’s prestigious philosophers, Porky Pig: ‘That, that, that’s all folks.’”

Now, I am a very simple person. If I lived in Mecca or Medina and America were attacked, I would head for the hills, or rather the desert. After the “bombing,” the Muslim religion would not permit citizens of the two holy cities to clean up the pig poop but I know some Baptists who would do it for $1000.00 per shovelful, plus expenses. Yes, it would be costly and it would take many years to decontaminate it but oil at $89.00 barrel would finance the clean up.

As my friend Porky Pig says, “That, that, that’s all folks.”