One of the oldest French banks, Société Générale, tells clients how to prepare for potential global collapse within the next two years according to a headline in London’sTelegraph, Dec. 2, 2009! That was a “global” collapse! And some of my friends suggest that I am an extremist! 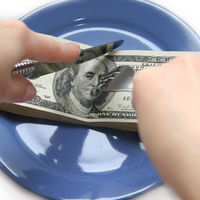 One of the oldest French banks, Société Générale, tells clients how to prepare for potential global collapse within the next two years according to a headline in London’s Telegraph, Dec. 2, 2009! That was a “global” collapse! And some of my friends suggest that I am an extremist! Yes, I have said that panic (an out-of-control response to economic collapse) was coming to the U.S. and the world economy not because I am a prophet but because I can connect the dots. Moreover, I expect the panic to reach Main Street where chaos will reign.

For a few years, I have been warning that panic is coming to the market. When that happens, everyone will know because Main Street will feel it bad. When the stock market was over 10,000 and gold was under $300.00, I told a stockbroker friend that the market would fall to 5,000 and gold would go to $2000. Recently, I told him I was fearful that he might have jumped from his penthouse apartment because of market volatility and massive fluctuations. Not yet, but he’s sitting on the ledge! Most brokers say that now is a great buying opportunity, but if you keep dealing with a broker that’s what you will be—broke. Others say, “go with the flow,” but you will likely go down the drain!

I have been trying to get people to get out of the market (unless they have taken precautions) for almost ten years, but they heard talk of a 36,000 Dow (from people who benefited from such talk) and what do I know! Some friends and subscribers did cash out and have called or written to thank me. Others stayed in hoping to recoup their losses. I think every investor should take advantage of any temporary market surge to minimize their losses–cash out. After all, something is better than nothing. The panic hasn’t started yet! Wait until masses of people call their mutual fund and get a recording or a constant busy signal! If you can’t reach them, you can’t sell. When everyone runs for the exit at the same time, many people are trampled in the stampede. Don’t get caught.

Some friends and subscribers did cash out and have called or written to thank me.

We still have politicians and economists telling anyone who will listen that the economy is not the stock market (and it isn’t), and the economy is strong (and it isn’t). However, no one is foolish enough to say that the stock market has no effect on the overall economy. Of course it does. If the market plunges to below 5,000, it will take the economy with it—the jobs market, the housing market, commercial markets, manufacturing, retailing, etc.

When blue-chip companies such as Chrysler, General Motors, Ford, Cisco, IBM, Safeway, General Mills, U.S. Airways, Avon, Big Lots, Lucent, Sprint Nextel, Xerox, Campbell Soup, Revlon, K-Mart, Rite Aid, Six Flags, Beazer Homes USA, Harrah’s Entertainment, Blockbuster, Clear Channel Communications, and Enron have major problems (and may fold or have already folded!), then they will pull others down with them. It’s like the giant trees in California that fall from infestation or lightning and they always take a hundred smaller trees with them. No large company goes into the tank alone. Some of the largest banks have lost billions recently because of that fact.

MSMBC reported in January of this year, “A slew of American heavyweight companies, including Caterpillar, Pfizer, Sprint Nextel, Home Depot and General Motors, announced cuts Monday adding up to 45,000 jobs lost. What’s more, a group of business economists predicted many more job losses in the year ahead.”

When companies like Caterpillar, the major producer of large earth moving equipment, are cutting way back then other industries, especially in construction, are in similar or worse condition. Caterpillar announced it was slashing 5,000 jobs on top of about 15,000 they have already cut. Sprint Nextel Corp will eliminate about 8,000 positions; Home Depot will cut 7,000 jobs, and Pfizer announced slashing about 8,000 jobs. Yet, in light of those facts, some “experts” tell us “the worst is over.”  “Recovery is on the way.” Let me remind you that the experts said the same thing 80 years ago!

Therefore, Mexico, India, Bangladesh, here we come. And jobs, there they go.

Much of our trouble is self-inflicted by government and business leaders. Many government leaders are socialists or at least anti-business while others are only stupid. We have taxed and regulated businesses until they fled the country for greener pastures and can anyone blame them? We can lay guilt on them for such “un-American activities” but they have to look at the bottom line and it is showing massive losses. Therefore, Mexico, India, Bangladesh, here we come. And jobs, there they go.

Businesses have been driven out of the U.S. by a federal and state tax rate of 39.1%. And those experts,  wearing rose colored glasses, are wrong again when they suggest that in 2010 economic problems will  peak followed by a slow recovery. Business owners and private individuals will not spend money, especially if they don’t have any, in an atmosphere where they have no assurance of future tax rates and regulatory policies. They might have a little more confidence if the authorities would get off their chests and stop choking them to death. However, when politicians stop choking citizens, they usually pick their pockets! You just can’t win.

I am suggesting that the party is over. Difficult days are ahead for all of us. It is time to save, get out of debt, cut back, make do, do without, plant a garden, fill a large pantry with food and water, and buy some gold and silver. Abraham did!